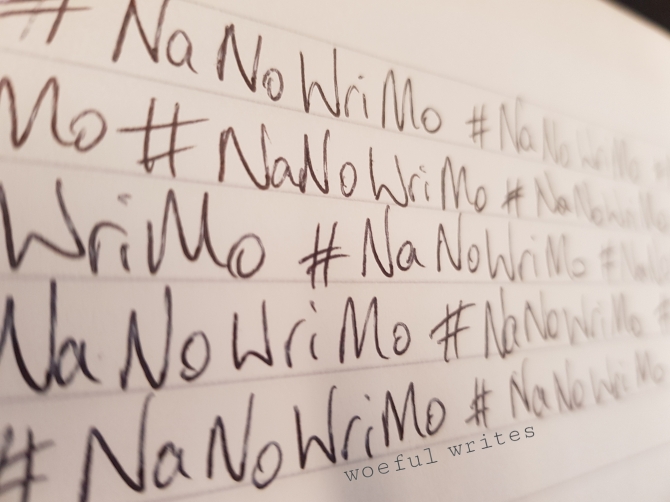 I headed into my final week knowing that even though it felt like an insurmountable challenge, this was still possible. I’d have to find the time, energy and creativity to write 2000 words a day. As you can see from my last post, I wasn’t full of positivity but something, somewhere along the way clicked.

I had hoped that when I decided to do NaNoWriMo (National Novel Writing Month) it would be a wholly positive experience but nothing ever is. From what I’ve experienced in life, even things that have amazing outcomes, can be a bit sh*t during the process i.e. University, pregnancy, weddings to name a few but the result each time was unbelievable worth it. Except Uni, I could have done that better.

I was starting to feel stressed about all the blogging, researching, reading and life things I put on hold for this month. But knowing it was almost over and realising it was still possible if I pushed myself, was such a weird feeling. I think it helped that I reached a part of the story that happened to spark my imagination. A burst of inspiration perhaps.

The story was on the last push to the end and I suppose the self-imposed pressure of not wanting to disappoint myself spurred me on. I never thought that would be a motivator but it really was. And when I got going it seemed nothing would stop me. I even took my laptop into work and NaNo’ed during my lunch breaks because I realised I wanted this so much.

Seeing the average words per day creep, getting closer to my goal and knowing I still had enough story to write was helpful. I would have really struggled if I’d written the bones of the story already and was just trying to flesh it out. I think that would have had a negative impact and the feeling of just writing words for words sake would have sneaked its way in again. When I was having bad days, that’s all it felt like I was doing.

I can’t say that I ever got writer’s block, thankfully, but my story did end up taking a few unexpected turns. So I’m a little fearful that when I read back through it all, it might not make sense or will have plot holes as big as the hole I got in my tights (stockings) yesterday.

But then it happened (and early may I add): 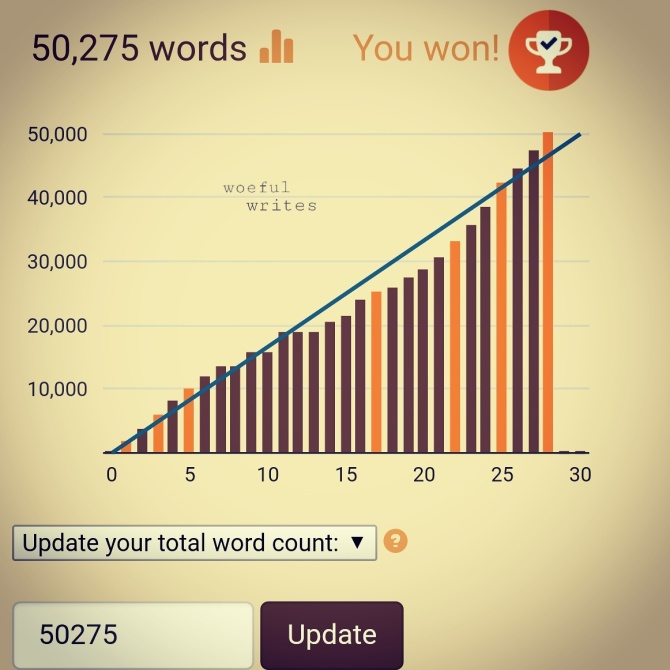 You can see that I went off track with my word count for the majority of the time!

And I could have kept going and honestly, I probably should have. But all my ideas were in there, some need to be taken out, some need to be refined, some need to be expanded on but I have a workable draft. And that’s the point. The fifty thousand words is just an aspiration, the point of NaNo is to have more words at the end than when you started. Surely anyone can do that, if I can – the serial story abandoner, the unfinished draft expert, the didn’t-even-bother-to-write-the-story-down writer – then you can too. Sign up for next year, if you can, start planning in September or October and get yourself writing in November.

Your stories will thank you!

What a way to spend a month!

To read more about how I got here, why not check out all my previous NaNo related posts.

NaNoWriMo Week Three: I Think I Hate You

4 thoughts on “NaNoWriMo – The End But The Beginning”